KO Review of The 100 Foot Journey 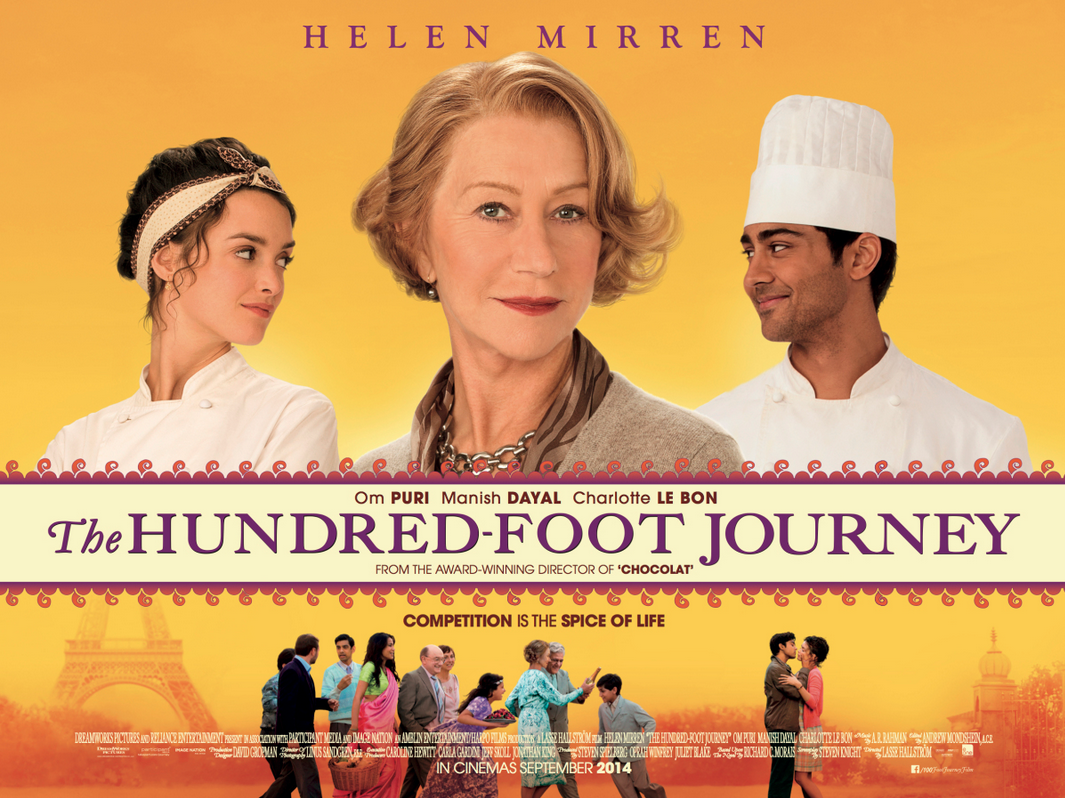 “This is a new era of romantic comedy” was a comment  overheard leaving the theatre after watching the screening of The 100 Foot Journey. A Disney film produced by Oprah Winfrey and Steven Spielberg based on the best-selling novel by Richard C. Morais, The 100 Foot Journey is a love story about following your passion, where ever it may lead you. In the case of The 100 Foot Journey, it leads a family from India to the South of France to share their culinary spice with the small rural town. The challenge ahead is that 100 feet away from the property where the Indian family establishes their Mason Mumbai, is the most famous Michelin-starred establishment in the rural town, run by a hard-nosed proprietress Madame Mallory (played by Helen Mirren).

The Indian Papa (played by Om Puri) starts an all out war on Madame Mallory when she reports his upbeat Indian music being too loud to the Mayor. The two continue to create problems for each other by buying out each others produce at the local market, and reporting violations to the Mayor. It quickly spins out of control when staff at Madame Mallory’s kitchen vandalize and set fire to Mason Mumbai. Madame Mallory puts an immediate stop to the war by washing away the graffiti and stating things have gone too far to her staff, letting one of them go.

The Indian son Hassan (played by Manish Dayal– the very handsome Indian version of Enrique Iglesias), who inherited his passion for cooking from his deceased mother, finds himself deeply captivated by the French Sous Chef Marguerite (played by Charlotte Le Bon a beautiful cross between Audrey Tautao and Keria Knightly) from Madame Mallory’s kitchen. Hassan delves into french gastronomy cook books Marguerite gifts him and spends day and night studying the 5 mother sauces of french cuisine. Hassan grows very fond of Marguerite. Hassan prepares the 5 mother sauces and plans a picnic in the park to surprise Marguerite, but when he makes romantic advances she suggests the two are not a match because they are both chefs and wouldn’t want to complicate their lives. Marguerites brush-off to Hassan fuels his passion more deeply and he tries to win the approval of Maguerite’s boss Madame Mallory. He creates a unworldly delectable omelette for Madame Mallory that impresses her so much, she offers Hassan a job in her Michelin-starred establishment. When Papa finds out Hassan is offered the job, he straight out rejects the idea until Madame Mallory camps out in Mason Mumbai and Papa caves in to her negotiations. When Marguerite finds out about the offer, she sees Hassan as competition and turns a cold shoulder to him. Again her boycott of Hassan creates an unstoppable drive in him, this time all the way to the top.