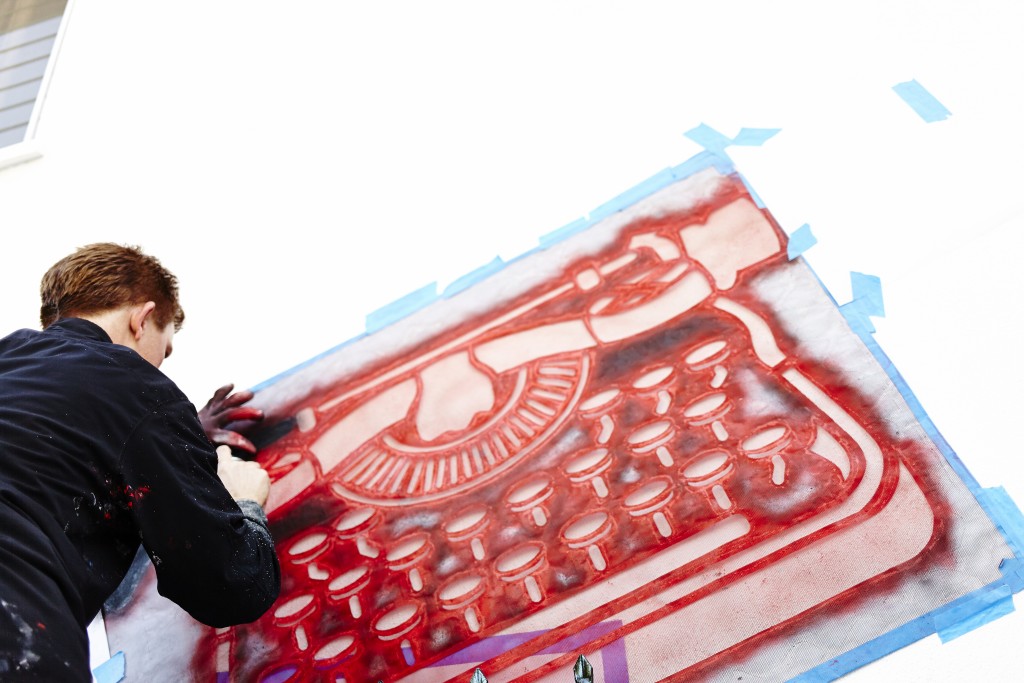 I love this street artist’s work so much. I am very excited to announce the first artist feature of 2016: WRDSMTH. WRDSMTHis a published author, screenwriter, and former advertising copywriter. Born and raised in the Midwest, he relocated to LA and started doing time in Hollywood, chasing the dream like countless others. Past and present worlds merged when he came up with the concept for WRDSMTH — a unique combination of stenciling and wheatpasting — and began temporarily tattooing walls in LA with indelible thoughts and phrases.

Active in the street art community since November 2013,  he’s made a mark in Los Angeles, San Diego, New York, New Orleans, Philadelphia, London, Paris, Edinburgh, and Melbourne. WRDSMTH has been featured in Playboy, LA Weekly, LAist,  LA Magazine, and The Philadelphia Enquirer.  Named one of The Art of Elsyum’s 2014 Emerging Artists and his work has been sold at Julien’s Auctions, Q Art Gallery, The Gabba Gallery, Stone Malone Gallery, and LabArt.

I first discovered WRDSMTH on a trip to Los Angeles when I saw the typewriter stenciled art on sunset with the words “If it is what you want to do for a living, wake up every day and get to work.” So inspiring. I loved it. After spotting a few more WRDSMTH works, I started following on instagram —@wrdsmth — and truth be told, this now my favorite instagram account to follow these days. The words are so brilliant and can be very romantic at times. I am sure they inspire so many people to follow their hearts and dreams. 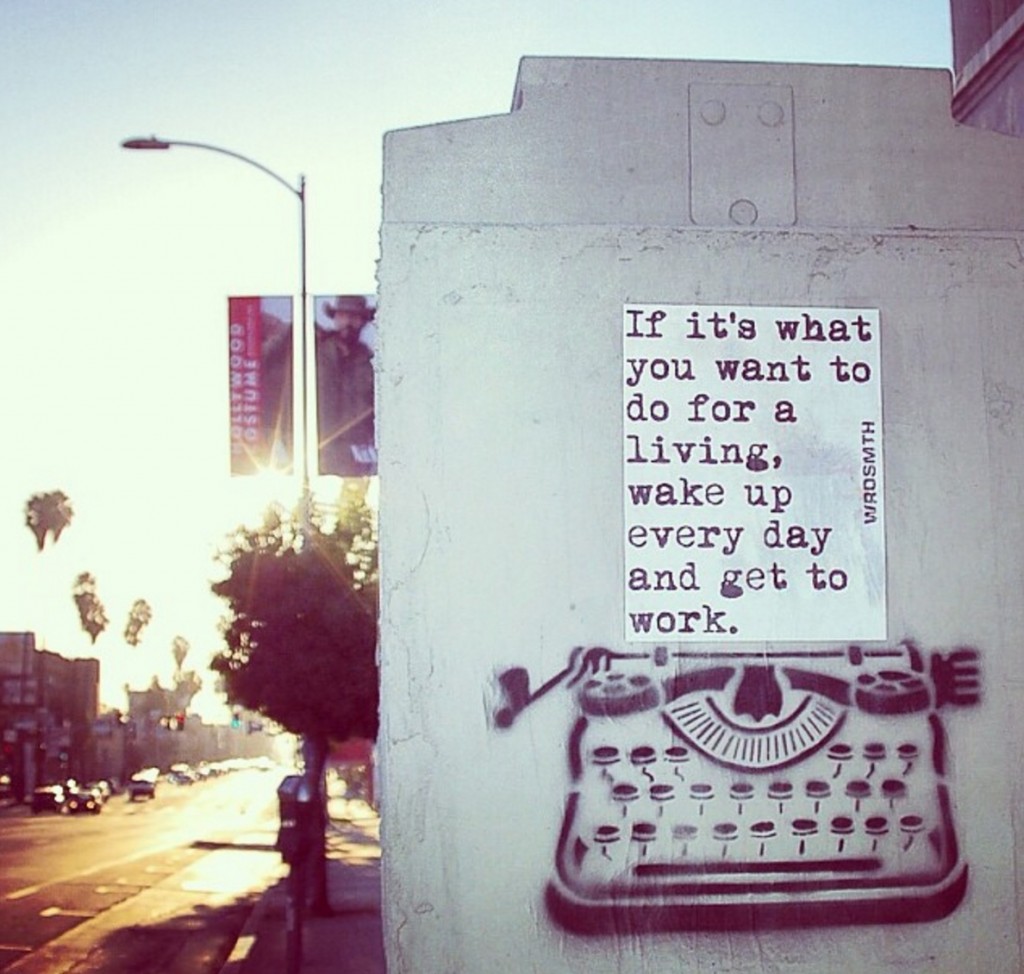 WRDSMTH:If you mean is WRDSMTH a group of people or an individual doing the work, the answer is it is just one person.

KO:What role does language play in your art?

WRDSMTH:It’s all about language. I am a writer and my work is word-based. I aim to write things that make people think, act, smile, and maybe laugh.

WRDSMTH:I think the action is altruistic. I started doing it for me and my words and work slowly began resonating with people and then the entire endeavor took off in a major way, which was both exciting and somewhat unexpected. I never changed what I aimed to do along the way, which was to bring some positivity and romance into the world via my writing.

KO:What is your personal definition of art?:

WRDSMTH:I think art is anything created by an individual with the intent to inspire or entertain another person. Maybe “woo” should be in there too, because a lot of art is made to win the hearts of others.

KO:At what age did you decide you were an artist:

WRDSMTH:I didn’t decide. I always was. One of my mantras is:“Don’t ever say you want to be a writer. You are a writer. Period.”That goes for any kind of art/artist — painter, musician, actor, etc.

KO:What is your earliest “art” memory that evoked the feelings inside you:

WRDSMTH:I saw the words “Tony Hawk is god” scrawled on a  wall in the neighborhood I grew up in and I was hooked. That, along with comic books, music, movies, novels, and good television motivated me to want to create — every day.

KO:What is your favorite film:

WRDSMTH:Eternal Sunshine of the Spotless Mind

WRDSMTH:If they made an action figure of me one day, it’ll probably be wearing a black t-shirt, jeans, and Chucks.

WRDSMTH:My friends would say moody music, but it’s more about the sounds being even-keel — The National, The xx, The Blue Nile

WRDSMTH:I’m a big fan of JMW Turner and Frank Miller.

KO:What artistic movement or period has influenced you the most in your own practice?

WRDSMTH:The current movement of street art gave me the insane notion of trying it myself and now, two short years later, I’m being interviewed about my work by the likes of you — which pretty much makes me go ‘wow’ on a daily basis.

KO:What did your parents do that helped encourage/discourage you in your artistic practice?

WRDSMTH:They punished me a lot for being a bratty kid, so I spent a lot of time in my room dreaming.

KO:What advice would you give future artists?

WRDSMTH:“Do it for yourself and hope what you do resonates with others.”and“Aspire to inspire others and the universe will take note.”

WRDSMTH:I believe in the jinx.

WRDSMTH:It pretty much looks like a madman pulling out his hair, cursing, tossing/turning, pondering, and working through it all, until that one breakthrough moment of clarity that results in a smile and (hopefully) something indelible.

KO:Where do you create? Where is your studio?

WRDSMTH:I write mainly in an office inside my apartment and I paint on a private patio outside my place.

KO:How has your style evolved?

WRDSMTH:The words have remained the same, but the method and execution has gotten better, bigger, and bolder.

KO:Where do you ideally see yourself in 7 years from now? Will WRDSMTH expand to more cities in different parts of the world?

WRDSMTH:I see myself doing what I do now, no matter where I am. I am already up in other cities and countries but I hope in seven years time the number of cities and counties has multiplied because I have an incurable case of wanderlust and I want to see the world and spread my WRDs wherever I go. 🙂 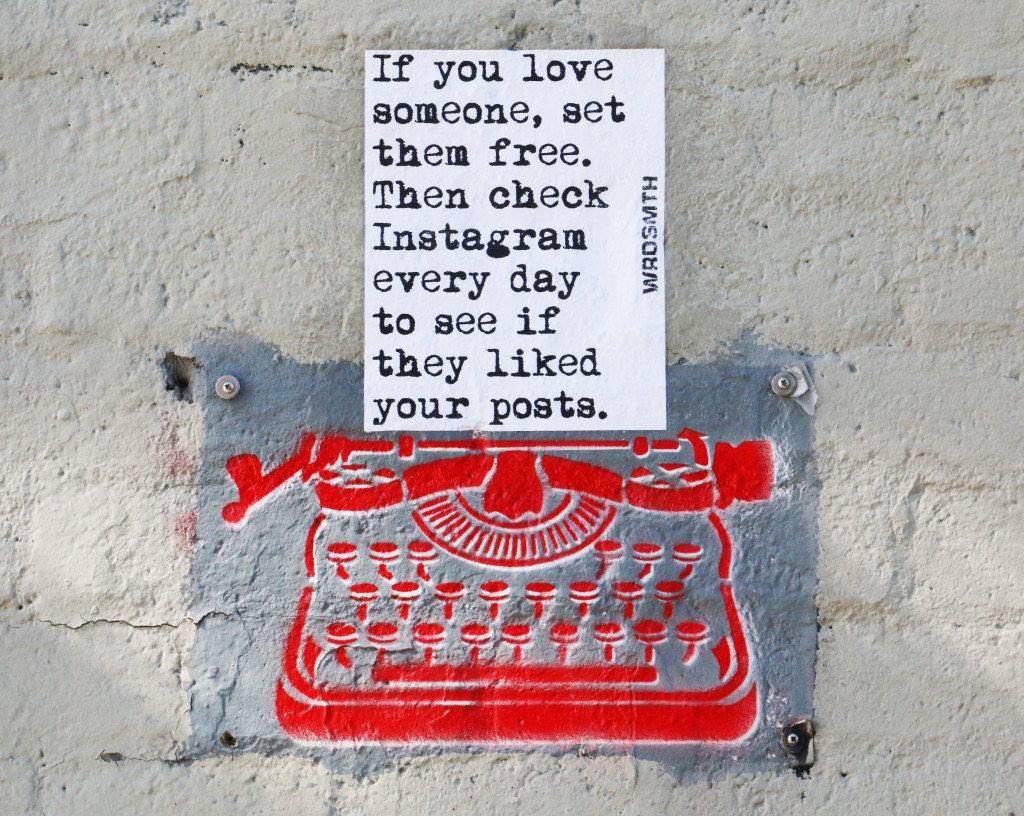 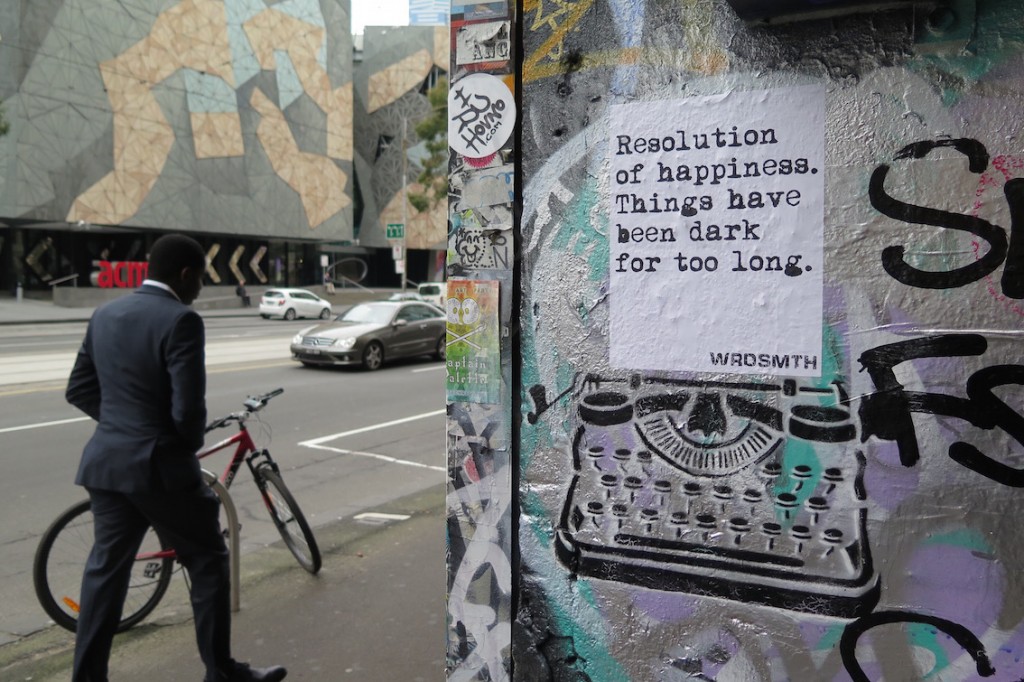 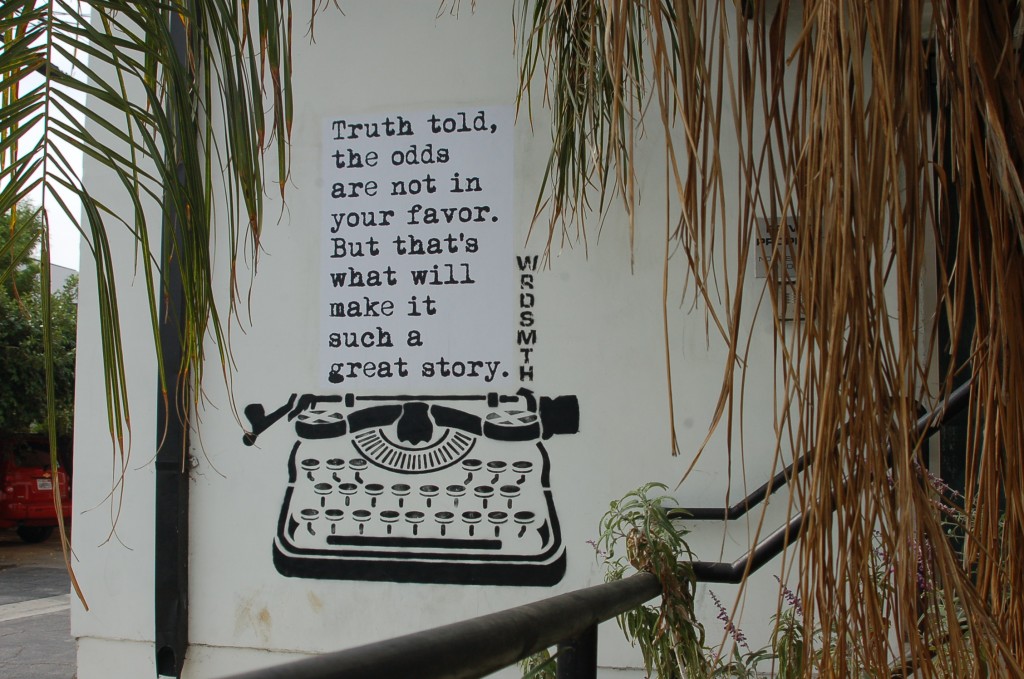 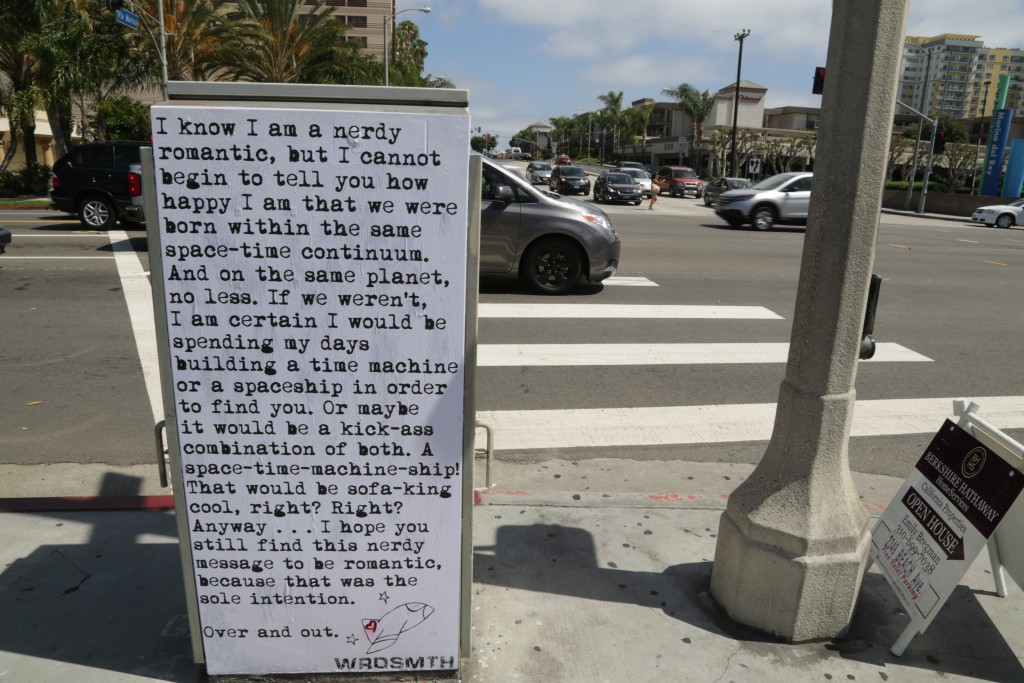 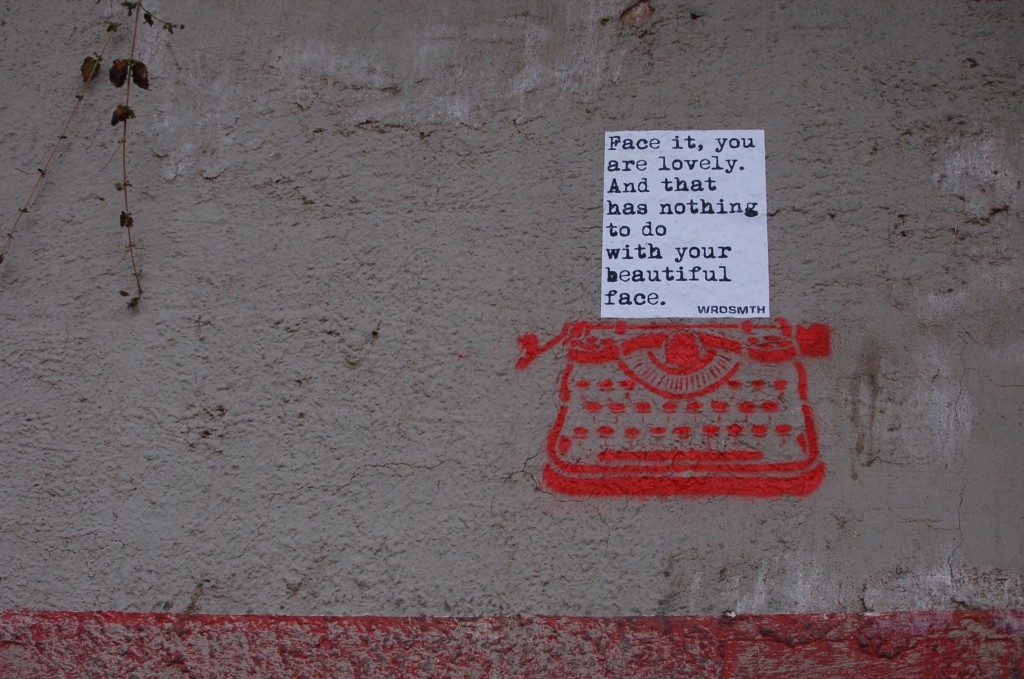 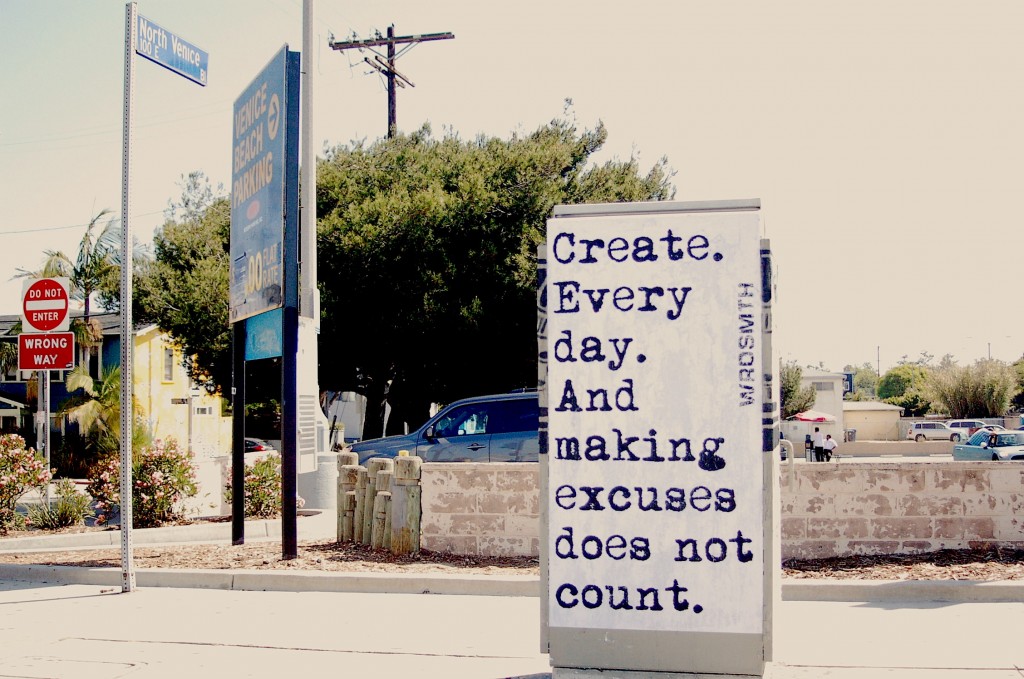 All photos courtesy of WRDSMTH