KO Review Thank You For Playing

Thank You For Playing(directed and produced by David Osit & Malika Zouhali-Worrall) is a documentary film about a young boy named Joel and his family. Joel was diagnosed with terminal cancer when he was one year old. Joel’s father, Ryan, deals with the grief by creating an abstract, poetic video game that is meant to honour his son’s life. We follow the family through the day-to-day battle with cancer and the creation of the game. This film will tear your heart out. I honestly cannot remember a time when I have been so emotionally exhausted after watching a film. Does this mean you should not go see it? No! Go and see this film! Trust me, it was amazing. If you enjoy pretty much anything having to do with art and it’s creation then you need this film in your life.

The most interesting aspect about this film for me was how Ryan utilized the medium of video game creation to express himself. I know recently there has been more video games coming out based on storytelling and narrative structure but I have never seen anything quite like this. Too often I feel like video games are created and consumed in such a way that they desensitize the player to emotion. Death and violence are just a means to accomplishing a goal but what Ryan has done with his video game has really flipped that model on its head. The game not only presents the player with the idea of compassion but also instills that emotion within them.

One of my favourite quotes from the film comes when Ryan is showing his video game at a convention. He states, “One of the first things people ask me is, well isn’t it kind of strange showing a game about terminal cancer to this environment. I’m thinking, why is that so strange? Why are we all walking around anonymous, not talking about the things that shape the way we are?” When Ryan said this it made me stop for a moment and consider. It is interesting that we can watch exceptionally violent things in a fictional format but when we are presented with watching a human being die from cancer we suddenly feel uncomfortable. Ryan has opted to show us the world so that we can learn something about ourselves. Based on the film, Ryan did receive criticism from individuals who believed that he was taking advantage of his son by creating the game. I feel as though, however, these people did not have a clear understanding of what Ryan was trying to do. Ryan was not creating a video game in the traditional sense, but was rather trying to utilize his chosen artistic medium (video games) to express himself. All in all, I thought this was a very interesting look into how we, as human beings, come to terms with grief and how Ryan utilized artistic creation through a somewhat experimental process to express his feelings.

Thank You For Playing is playing at CUFF.DOCS Calgary Underground Film Festival on November 22, 2015 at 4:30pm. Click HERE for more information. 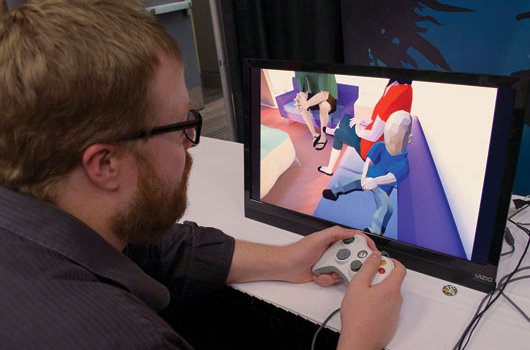